About the Sonoma Film Institute

The opening screening of our 50th anniversary season is delayed until March 3rd due to updates to Warren Auditorium. Screenings will run through Sunday, May 7th. Our full schedule will be posted by the second week in February. Thanks for your patience!

For your safety and that of other guests, masks are recommended, but no longer required indoors.

The Sonoma Film Institute (SFI), located on the Sonoma State University campus, is the oldest film repertory organization in the North Bay Area. Since 1973, SFI has unspooled enough celluloid to reach the next galaxy. SFI screenings - ranging from silent cinema to the avant-garde, from contemporary American fare to films from the developing world - expand the educational opportunities to students, as well as providing cultural benefit to the campus and surrounding community. 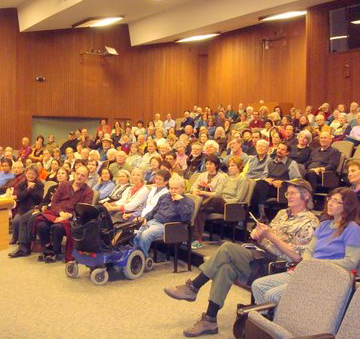 SFI has a long history of offering the best of contemporary cinema to local audiences. During the 1970's, the works of New Wave German directors Rainer Werner Fassbinder, Werner Herzog, and Wim Wenders were presented in their first Northern California screenings. American independent filmmaker John Sayles, Mike Leigh and Jane Campion were first discovered here by local audiences in the 1980’s.

SFI has hosted personal appearances by such Hollywood legends as Nicholas Ray (REBEL WITHOUT A CAUSE and JOHNNY GUITAR), and King Vidor (THE FOUNTAINHEAD and DUEL IN THE SUN) as well as veteran British film director Michael Powell (THE RED SHOES and I KNOW WHERE I'M GOING) and Academy Award winning film editor Thelma Schoonmaker (RAGING BULL). SFI has also sponsored lectures by independent artists Les Blank, Ernie Gehr, Nancy Kelly and Kenji Yamamoto. In recent years, SFI audiences have enjoyed filmmaker visits by legendary documentary filmmaker Frederick Wiseman, and recent Academy Award nominee RaMell Ross, along with screenings of his film HALE COUNTY THIS MORNING, THIS EVENING.

Under the School of Arts and Humanities, SFI's programming is tightly coordinated with Sonoma State University classes. In addition, films screened by SFI are commonly utilized by SSU instructors as required or recommended sources for their students.